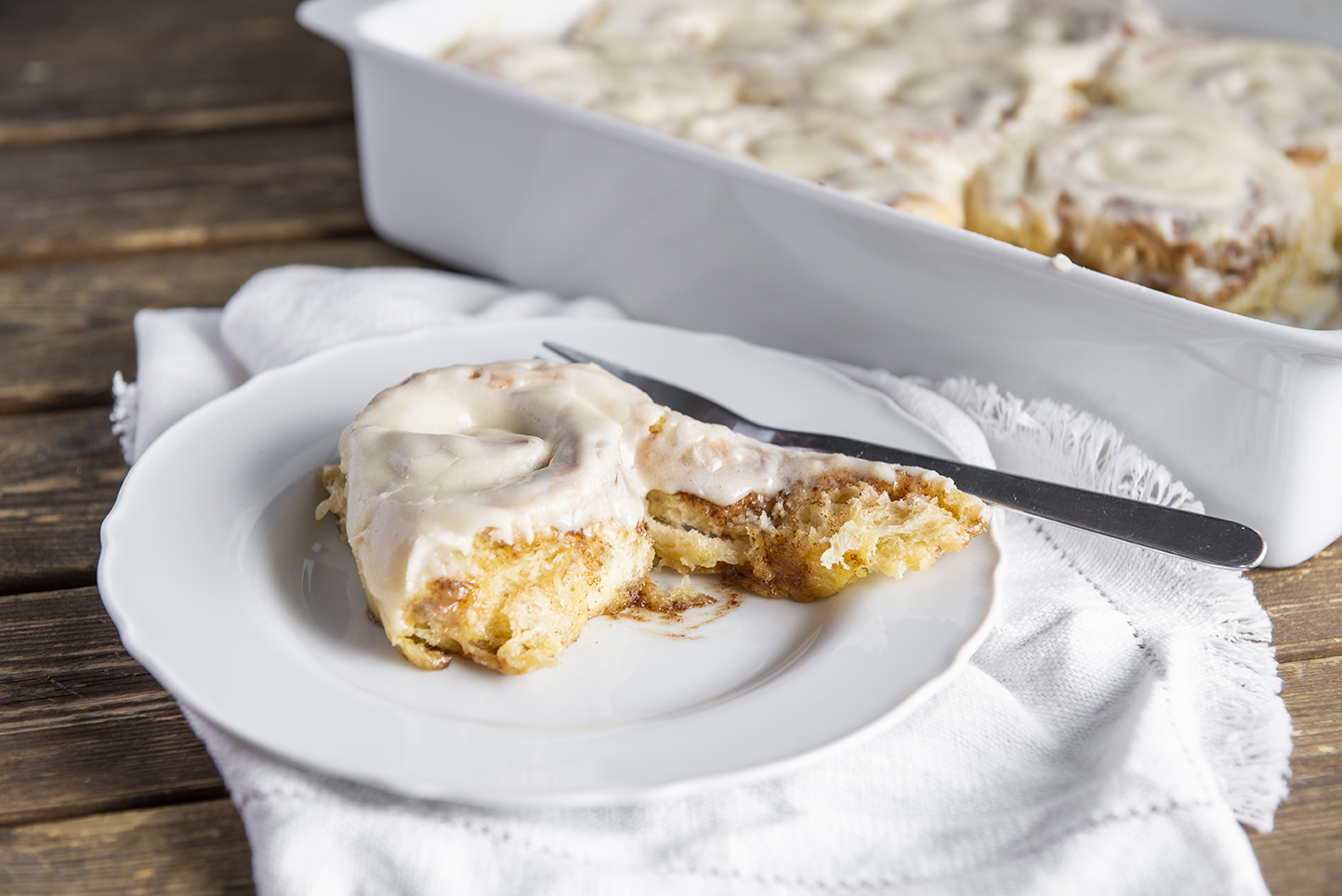 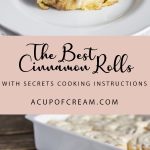 Cinnamon rolls are honestly a tricky thing to make well. Sometimes you get a super dry roll that just tastes like plain sugar, sometimes you get a roll that is so doughy in the middle you’re worried it’s going to make you sick. Finding the balance between a roll that’s done, but not dry, that also is gooey and melts in your mouth is something I’ve been working on for several years. With many, MANY, batches baked and trying to come up with my own recipe and technique, I came up with this one!

The secret?! It’s baking some of the frosting INTO the rolls during the last few minutes of baking! I hope you give it a try, it’s life changing in the cinnamon roll world. 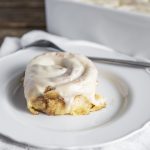 In the bowl of a stand mixer pour the warm milk followed by the yeast and sugar. Stir lightly and let sit for about 5-10 minutes till starting to bubble.

Melt the butter and let cool during this 5-10 minutes of waiting on the yeast.

Remove dough from bowl briefly, spray with cooking spray, return the dough and cover with plastic wrap. Put in a warm place and let rise for 1 hour, or till doubled in size.

Sprinkle a clean counter with flour and tip dough out. With a rolling pin, roll the dough out as even as you can thickness wise into a roughly 10×20 inch rectangle.

Using a pastry brush or a rubber spatula, spread the butter onto the dough as evenly as you can.

In a small mixing bowl combine the brown sugar and cinnamon till combined.

Sprinkle the cinnamon sugar mixture all over the butter and gently press it into the dough a bit.

Lightly butter a 9×13 inch casserole/baking dish and place each roll in 3 across and 4 down. Cover with plastic wrap and let rise again for another hour.

***Overnight instructions- At this point, you can put them in the fridge till morning. You have several options for the rise after you remove them from the fridge.

1- Remove them from the fridge and place the pan on a hot pad or thick towel (just don’t put it on a cold stone counter or it will stay cold and not let them rise) and let them rise for 2-3 hours till visibly starting to be good and puffy. Continue on with the baking instructions.

2- Preheat your oven to the lowest heat setting it has. Once it’s come to be the lowest temperature on your oven, shut the oven off, open the door and put the cinnamon rolls in the oven (remove the plastic wrap and place foil on it instead). Let them sit in the warm oven for 45 minutes. Remove and let sit on the stove till your oven is preheated to 350. Continue on with the baking instructions. ***

Preheat oven to 350 F during last 30 minutes of the second rise.

Bake for 15-20 minutes till rolls are starting to get a bit golden hint on top.

During this time, make the frosting. In a medium mixing bowl, whip the cream cheese and butter till light and creamy. Sift in the powdered sugar and whip again till combined well. Add 1 Tablespoon of the cream, the vanilla and a pinch of salt and whip till combined. You don’t want the frosting to be too thin, but if it’s just too thick add another tablespoon of cream. Whip for at least 2-3 minutes using a hand mixer.

Remove the rolls when they get the smallest hint of golden on top of them. Quickly frost with about 1/4- 1/3 of the frosting, letting the frosting melt and ooze into the rolls.

Place back in the oven for another about 5 minutes to finish cooking.

Let cool for 15-20 minutes and frost generously with the remaining frosting.

Wow! I’ve made a lot of cinnamon rolls and these take the cake! I’ve never heard of baking the frosting into the rolls, but it really takes the cinnamon rolls to the next level. 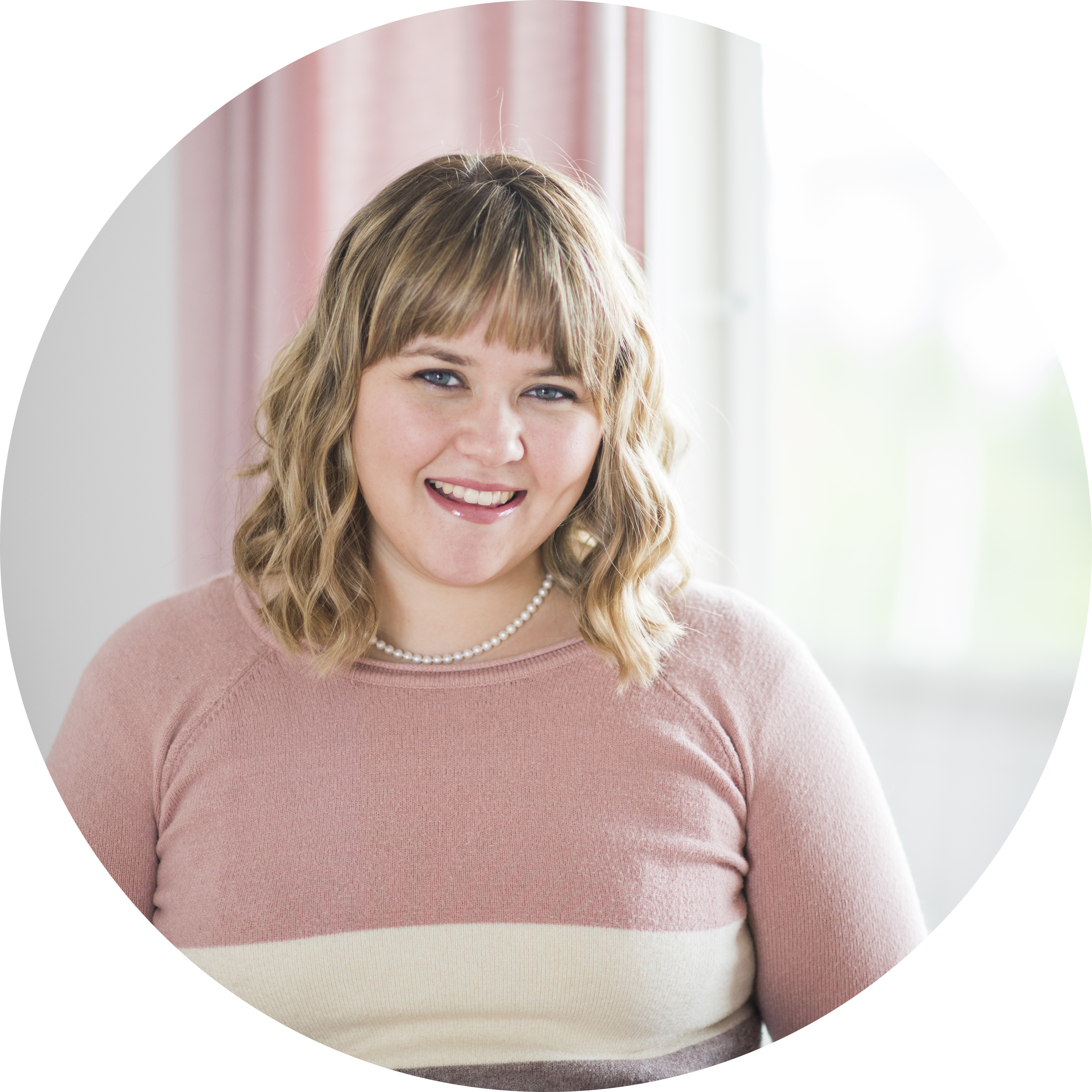 Hi! I’m Brianna. I’m an American expat living in downtown Helsinki. Cooking and baking are my outlet after a long day of being a mom to 2 small girls with a husband who works long hours. I love to feed people so try a recipe or two! I promise you’ll get a bite of my home in each one.